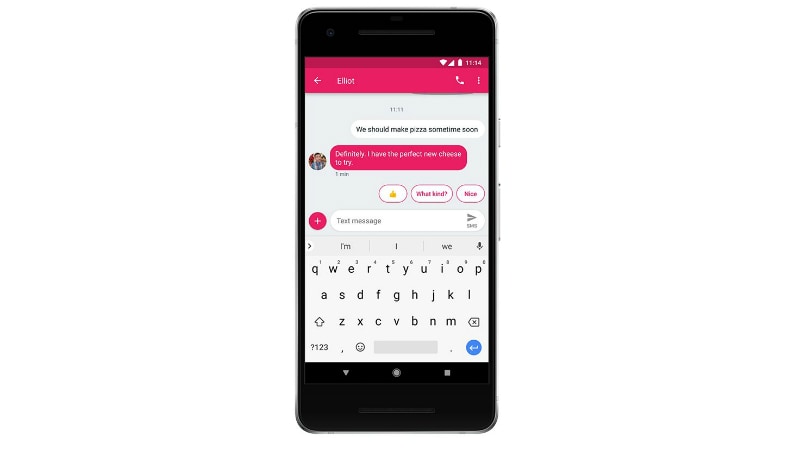 Google announced on Wednesday that it is now rolling out the Smart Reply feature to messaging app Android Messages. The AI-based Smart Reply feature was launchedwith Google Allo back in September 2016. It will be available only for Project Fi users currently, with no timeline on a wider rollout. Google will require access to your SMS history to help it generate intelligent responses.

The announcement was made through a tweet on Project Fi’s official Twitter account. Smart Reply, launched with Google Allo, automatically suggests responses to messages that you have received. It provides contextual replies by analysing the recent message in the thread. It can be turned off by going into Settings in Android Messages, under Smart Reply. The feature currently works with Google Allo, Gmail, Google Assistant, and, now, Android Messages – but the last as we mentioned is only for Project Fi users.

Notably, this addition of Smart Reply to Android Messages comes a week after a teardown of Google’s Gboard beta APK revealed that the Smart Reply intelligent suggestions are coming to the Gboard app on Android. The keyboard is expected to offer phrase-length suggestions in the topmost row. Thanks to the upcoming integration, the feature will work on wide variety of apps, negating the need for third-party app developers to bring Smart Reply support or similar features on their offerings. Apart from first party apps like Allo, Android Messages, and Hangouts, the feature was also spotted working on Facebook, Messenger Lite, WhatsApp, Facebook Messenger, and Tencent’s platforms. It also works on Snapchat, albeit with limited functionality.

While Allo offers encrypted messaging, Google has been known to store your chat history and data to help enhance the Smart Reply feature. The company can decrypt your data on its servers. The process on Smart Reply on Android Messages is yet to be revealed.

Google has been shuffling between Hangouts, Allo, and Android Messages with no apparent streamlined approach to mobile messaging. It has offered features on different apps from time to time.

Project Fi is Google’s virtual mobile phone service that provides phone, messaging, and data services through a combination of Wi-Fi and cellular networks. The service has partnered with Sprint, T-Mobile, and other cellular operators in the US with roaming capabilities in over 135 countries. A basic Project Fi plan starts at $20 (roughly Rs. 1,300) monthly with access to unlimited domestic voice calls, unlimited domestic text messaging, and unlimited international text messaging. Data is additional at $10 (roughly Rs. 635) per gigabyte.